We’re excited to announce that we now offer FDA-cleared CoolTone, the latest innovation in body contouring.
CoolTone is a great, nonsurgical way to tone, firm, and strengthen your abs, buttocks, and thighs.

While fat loss remains to be a dominant concern among people seeking cosmetic procedures, the desire for muscle definition is coming to be of significant prominence. Many people dedicate their lives to the gym, downing protein shake after protein shake, only to find that they’re unable to achieve the results they desire on their own. Don’t feel discouraged. The revolutionary new CoolTone treatment (from the makers of CoolSculpting) is here to help fitness enthusiasts reach their muscle toning goals, even if they feel as though they’ve hit a wall with weightlifting, yoga, pilates, or calisthenics.

What Is The Difference Between CoolTone And CoolSculpting?

CoolSculpting is long established as a popular procedure. During a CoolSculpting treatment, the patient is placed under a device that isolates areas of unwanted fat on the body – usually in common complaint areas like the “muffin top” portion of the belly or the thighs. The device then freezes the fat, killing the cells and allowing the body to metabolize them. The process begins with the machine and the body does the rest – the fat cells die and leave the body through urine. The end result is a smoother surface with a more favorable distribution of fat cells.
CoolTone, unlike CoolSculpting, does not actually cool anything. The name is derived from its sister treatment. CoolTone utilizes a similar simplicity via an outpatient treatment to stimulate muscles (such as the abdominal muscles) to improve their tone and definition.

How Does CoolTone Work?

CoolTone utilizes something called magnetic muscle stimulation, or MMS. The device targets your desired muscle group and sends electromagnetic energy into the muscles, causing them to contract without any effort. It’s an easier version of going to the gym, where one would have to laboriously manually contract muscles over and over again to see their desired result. These contractions cause the underlying muscle fibers to strengthen, leading to a more defined physique with better muscle tone.

There are treatments designed to achieve similar results, such as Emsculpt, but the manufacturers of CoolTone claim that their device provides 50% more MMS than other devices. An increased amount of electromagnetic energy should expedite results, allowing patients to achieve their goals with fewer sessions.

Currently, the CoolTone device has been approved by the FDA to treat abdominal muscles, thigh muscles, and glute muscles. At the moment, it has not been approved for use on the upper extremities or the calves.

How Many CoolTone Treatments Are Necessary?

Many people claim that they begin to feel the results of CoolTone after one treatment, but several will be necessary to help the patient achieve their goals. These goals will naturally vary from patient to patient, as well as the areas being treated. Allergan, the company that manufactures the CoolTone devices, recommends that patients schedule four treatments in a two week period to maximize their results. Results will always vary.

Is Everyone a Candidate For CoolTone?

In order to see the benefits of CoolTone and to allow the device to work to the fullest extent, the electromagnetic energy must be able to reach the muscle easily. CoolTone can and will penetrate past the fat layer on many patients. Patients with a significantly higher percentage of body fat in their desired treatment area may not see or experience the results they desire without first eliminating the surplus of body fat.

Because CoolTone provides direct stimulation to the muscles that cause contractions, the treatment isn’t safe for pregnant women. It’s not recommended for menstruating patients or patients close to menstruation, as the forced muscle contractions can stimulate cramps and cause an early period or worsen their current period. It’s best to wait until after your cycle to schedule your CoolTone treatments.

Are There Any Side Effects With CoolTone?

It’s best to regard CoolTone treatments in the same way you would regard a very intense, very long workout. The same feelings you have after you’ve pushed your muscles to their limits are the same feelings you’re likely to experience post CoolTone treatment. Many people report pain in their muscles, tendons, or joints and temporary muscle spasms. Make sure you’re incorporating the recommended amount of protein into your diet, and treat the side effects the same way you would treat post-workout soreness. Use the same self-care routine you would normally use when you return from the gym.

CoolTone Treatments At The Spa At West Glen

The Spa at West Glen was the first location in Iowa to offer CoolTone treatments. We’re proud to provide this revolutionary service to our guests. If you’d like to know more about CoolTone, we welcome you to book an appointment today.

your abs, buttocks, and thighs with a firmer, more defined look.

Obtain your body contouring goals. CoolTone may be a great addition to your current fitness routine.

a new level of muscle tone and strength.

the latest in body contouring from makers of CoolSculpting. 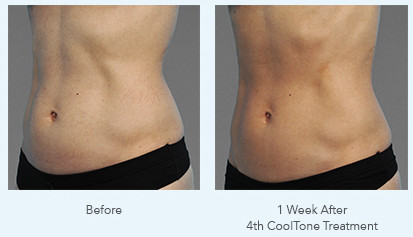 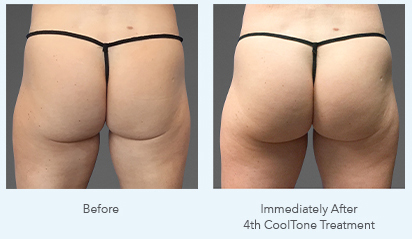 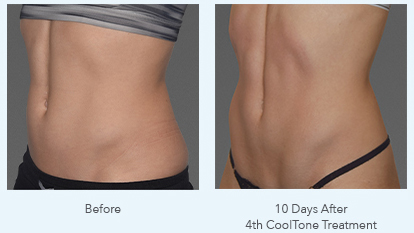 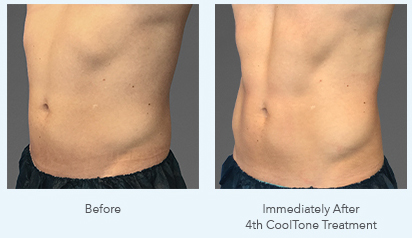